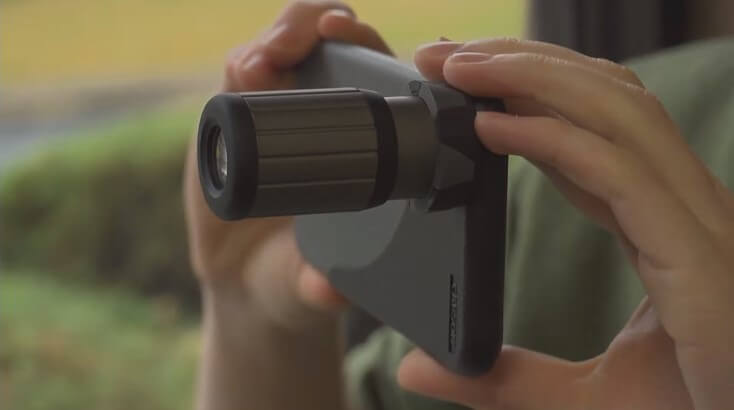 How do you use an iPhone on a monocular The most important thing is to have fun and observe our feathered companions as they go about their business when it comes to bird watching.

However, there are times when one feels compelled to chronicle what is being witnessed for numerous reasons.

Field notes, a fast drawing, a sound recording, a photograph, or a video can all be used as documentation. The distinction between a record that can add to our knowledge and one that may never be fully verified is frequently determined by good documentation.

Suppose you find it difficult to write and draw while birding. You may never be able to capture significant notes or do fast sketches in the field. Sound recording and capturing photographs or videos may seem like a stretch if you don’t enjoy bringing numerous pieces of equipment out in the field.

But, as long as you value documentation, there are two instruments that we all (usually) bring with us when we go birding: monoculars and a smartphone. And if you want to photograph birds, these two can be a potent combo.

How do you use an Iphone on a monocular

Acknowledge the following steps to use an iPhone on a monocular-

Get your Monoculars out and adjust the eyecup to provide optimal eye relief by lifting/releasing/moving it. The distance between the user’s eye and the monocular’s eyepiece lens is in simple terms.

Not all monoculars feature adjustable eyecups, especially older ones. This step will have to be skipped in this situation.

After you’ve set up your monoculars, it’s time to set up your phone. It’s easy — open the camera app on your phone! If your iPhone comes with a folding cover, it’s best if you take it off before using it.

You may have to move the iPhone about a bit to get the optimum fit for your phone-binocs combo. You could get dark circular corners on the frame, but that’s fine as long as the image’s center remains clear and shadow-free.

If you’re using monoculars without eyecups, move the iPhone closer and farther away from the eyepiece lens until you find the optimal distance for image clarity.

Another option is to hold your iPhone sideways. This is especially handy if you have a physical button on the side of your iPhone to press to take a picture.

Hold your hands steady and click away now that you’ve obtained the image you want on your phone. Your subject will usually be brought into focus by the iPhone focusing function. If it doesn’t, you may use the focusing wheel on the monoculars to bring the subject into focus.

Now that you’ve acquired your photographs, all you have to do is trim them and utilize them as you want! Remember that this approach may take some time to master, so don’t give up if it doesn’t work right away.

If you have enough time, you can even photograph flying birds! Just in case, it’s a good idea to take as many photographs as possible.

Acceriers that can uplift the view quality of a monocular

The most crucial stage in the procedure is to have the appropriate tools. This will save you a lot of time and frustration.

While you can use any pair of monoculars with your iPhone to start capturing photographs, there are a few distinct pieces of equipment that you should consider if you want higher-quality shots.

It’s critical to keep the binoculars and iPhone perfectly motionless to capture decent shots. As a result, securing them to a tripod is essential. I would avoid the cheapest choices because they are typically fragile and will not hold your setup fully stationary.

It’s also crucial to consider the type and quality of the tripod head you use since it may make aiming your monoculars a breeze or a total nightmare.

The Vanguard ABEO Pro 283CGH Tripod Kit, which includes the Vanguard Aveo Pro 283CT tripod and the Vanguard GH-300T Pistol Grip ball head, is what I use. Both of which I strongly suggest.

You’ll need an adapter to attach your monoculars to the tripod unless you have a big pair of monoculars particularly made for astronomy, some of which come with a built-in tripod adaptor on a bar. This is usually quite simple to perform, and the adapters are reasonably affordable.

Meopta USA has now released the MeoPix coping Adapter, which allows you to connect your iPhone 4 or 4s to nearly any monoculars or spotting scope eyepiece. As a result, the MeoPix turns your iPhone into a long-range photo and video capture device.

To capture long exposure pictures and optimize for low-light photography, you’ll need to utilize an app to manage the iPhone camera. This is not possible using the iPhone’s conventional controls.

All of which gives you complete control over exposure, ISO, and focusing on your phone. They also store age files in raw formats, which makes post-processing much easier.

What can you shoot using an Iphone on a monocular

For example, you won’t be able to acquire any close-ups of Mars or Jupiter with this approach. However, with effort and experience, you may get some pleasing outcomes. Objects that can be photographed with only a smartphone:

The moon in the sky can be photographed, but you won’t be able to zoom in for close-ups. If you want to do that, look at techniques 2 and 3 in this tutorial, but you may also photograph the moon in the blue hour before sunrise or after sunset, when the sky is not at its brightest or darkest, allowing the moon to stand out.

This approach may capture the brightest constellations, which is not possible with a regular iPhone camera. You may also record star trails as the planet rotates by using longer exposure settings.

Capture the International Space Station (ISS) crossing the sky. A moon, planet, or machine that circles a planet or star is known as a satellite. The term “satellite” usually refers to a mechanism sent into space and orbits the earth or another celestial body.

If you’re fortunate enough to see the Northern Lights, these tips will help you get the most out of your smartphone photos.

Aurorae is a natural electrical phenomenon in which streamers of reddish or greenish light emerge in the sky, particularly near the northern or southern magnetic poles.

The interaction of charged particles from the sun with atoms in the upper atmosphere causes the effect. Aurora is the name given to it in the northern and southern hemispheres, respectively.

Consider these “space rocks.” Meteors are fireballs or “shooting stars” that enter the earth’s atmosphere (or that of another planet, such as Mars) at great speeds and burn up.

A meteorite is a meteoroid that survives its journey through the atmosphere and lands on the earth.

Q1 Is there an Iphone Bincoualr App?

Q2 How do you super zoom on your Iphone?

Double-tap the screen with three fingers without lifting your fingers after the second touch, then drag up or down to adjust the magnification. Alternatively, use three fingers to triple-tap and then move the Zoom Level slider.

smartphone camera manufacturers are presently obsessed with low-light photography, which has clear advantages for photographing nightscapes.

The Huawei P40 Pro and the iPhone 11 Pro, for example, include a night mode that allows for up to nine seconds of exposure. Special “night modes” on these flagship phones combine ever-better sensors with new types of computational photography.

Manual ISO and exposure time adjustments are available, although the built-in ‘night modes’ seem to bring out the most detail while suppressing noise rather effectively. Some people can stack several photos taken with various settings.

Hopefully, this tutorial has provided you with all of the information you want and given you the confidence to get out there and begin snapping photographs. While it may appear daunting at first, once you get the hang of it, you’ll be showing off your photographs in no time!

Also read: Are binoculars or monoculars better for stargazing?

1 thought on “How do you use an iPhone on a monocular?”