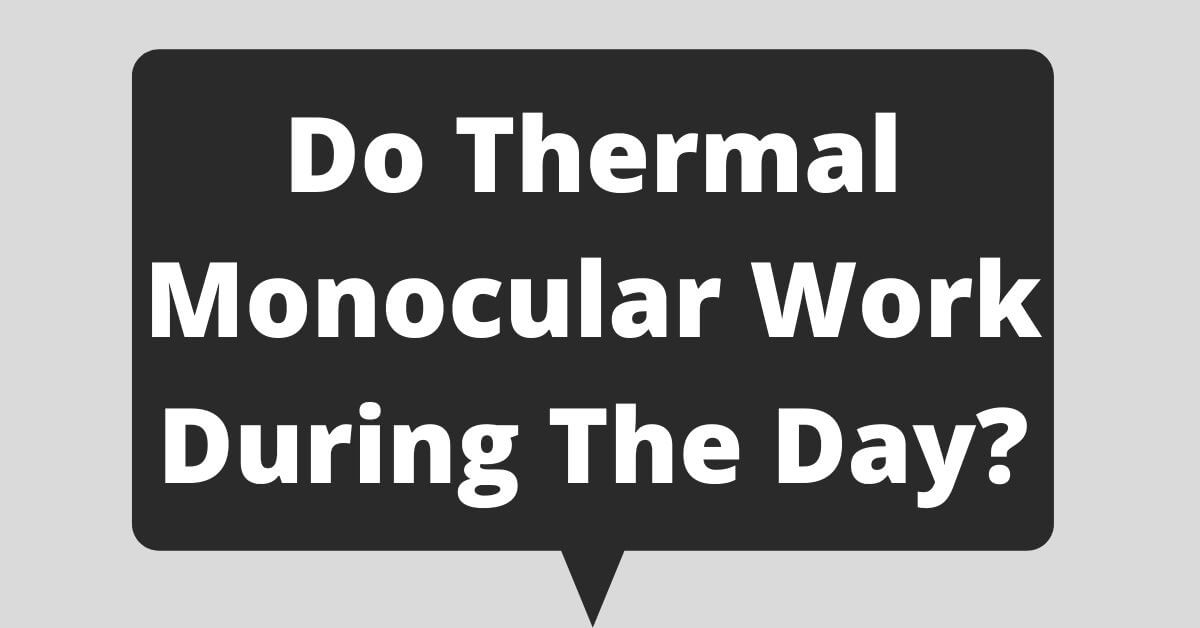 Thermal imaging technology has been around for almost 60 years, but only for the last 20-30 years has it been available to civilians.

While hunting is its most popular use, thermal imaging’s vast range of applications ensures that it will continue to dominate technology in various industries for many years.

Thermal imaging is instrumental in law enforcement situations, such as identifying whether a car has been driven lately or whether a discarded handgun has been discharged.

Thermal imaging has also shown to be quite helpful in search-and-rescue operations. Ranchers and farmers who need to keep track of their livestock herds on significant holdings now have it as a must-have.

Thermal technology has medicinal uses; it can be used to detect fevers in animals, including humans, and it may be able to predict pregnancy.

As these devices become more sophisticated, small, and inexpensive, their wide variety of applications will likely expand. In a nutshell, thermal technology is the future.

How does a Thermal Monocular Work

Regular film and digital cameras, on the other hand, can only detect light in the visible spectrum (0.40 – 0.75 micrometers), which is the fraction of the electromagnetic spectrum visible to the human eye.

Because all things with a temperature over absolute zero (0 Kelvin = -459 ° Fahrenheit = -273 ° Celsius) produce infrared radiation, thermal cameras can see objects with and without visible light.

Most thermal cameras can only detect things that are warmer than -122 degrees Fahrenheit.

During daylight hours, thermal imaging gives hunters a vast edge. Night-vision technology is ineffective during the day because the internal Image Intensifier Tubes (IITs) might be destroyed if exposed to sunlight; therefore, utilizing it during the day is not recommended.

So, what are the benefits of wearing a thermal throughout the day for those willing to invest the extra money?

The ability to see through dense undergrowth and vegetation is one of the most impressive advantages of daylight thermal use.

Hunters frequently wait for hours in the hope of catching a glimpse of their target, only to see nothing.

This is aggravating. With a thermal device, all those small camouflaged birds, creatures, pigs, or anything hidden in the undergrowth will instantly become apparent.

A deer’s antlers will also show up on a thermal device like fireworks on July 4th when they are engorged with blood.

Another typical source of annoyance is killing an animal, generally a deer, and then hunting for the wounded animal for kilometers since the shot was not a dead shot.

Deer are mighty creatures that will run for kilometers, generally over rugged, uneven terrain, unless shot in the head or heart.

This difficulty is quickly remedied with a thermal – a heated blood trail will pop out on a thermal device, making it instantly visible and readily trackable.

Cold-blooded animals like reptiles and fish, for example, do not generate heat signatures and hence are not immediately detectable with a thermal instrument.

However, their shape will be visible — better than nothing, similar to what you’d see with a night vision gadget or regular, un-powered glasses.

Improved target recognition is the next topic of emphasis for thermal devices. No hunter wants to kill their neighbor’s beloved dog, cattle, or, God forbid, someone.

Thermal imaging allows for rapid and accurate target identification, eliminating the possibility of a fatal instance of mistaken identity.

Before using thermal devices, verify with local regulations, game wardens, and park officials. Many states and nations do not allow thermal devices; thus, getting permission before a thermal-powered hunt is essential.

Reasons why Thermal Monocular are Important

Condenser tubes collected and amplified ambient light to produce an image in the earliest generations of night vision equipment.

However, it required some form of light to magnify, whether moonlight or stray rays from a faraway city.

Thus, the devices were ineffective primarily on a moonless, clear night. Thermal imaging, a relatively recent technique, has propelled night vision into the twenty-first century.

If you’re planning on upgrading your night vision equipment anytime soon, here are a few things to consider.

Following are the reasons why thermal monocular are important-

Thermal imaging systems, unlike night vision, do not require any light to operate. On the other hand, Thermal imagers detect minute temperature variations and utilize them to create a picture.

Everything generates heat energy, whether a deer or a rock, which the advanced sensors convert into a colorful image.

A thermal imager’s sensors can detect changes as small as 0.01 degrees, allowing it to determine if a set of tracks is new. When following a newly shot deer, it may even pick up the tiniest blood drips.

Thermal monocular can “see through” certain obstructions that would typically block your vision because they sense temperature variations.

You won’t be able to scan through concrete like a superhero with your new thermal device, but you will spot a coyote skulking through a patch of tall goldenrod.

Thermal units are unaffected by smoke or fog, so if you frequently sail a boat through foggy conditions, consider their visual aids.

Because they depended on a mechanical zero, which required moving the entire six-pound device to change the crosshairs, those scopes weren’t recognized for accuracy.

The accuracy has considerably increased, and it is now possible to sight-in several troops with only one shot. Modern appliances are much slimmer, and the thermal cores give significantly improved imaging.

Thermal monocular allow you to see in the dark during the day. You’ll receive the exact image whether you’re in the broad Sun or the most profound darkness since they use temperature instead of light.

If you want to go to the range or do some daylight predator calling, you won’t have to switch optics and risk losing your zero.

No. The goal of thermal imaging and night vision is to improve sight in low-light situations, but the physics behind the two technologies is different.

While night vision technology enhances visibility in low-light situations by amplifying the quantity of light in the image, thermal imaging benefits high contrast images, making it simpler to spot a target against the background.

The video below goes over this new feature in greater detail and the distinctions between night vision and thermal imaging.

Q2 Can we use the thermal monocular for catching poachers?

Therefore the bulk of poaching activities take place at night.
Poaching of elephants and rhinos and the subsequent illegal trade in ivory and rhino horn has been linked to the funding of terrorist organizations.

Q3 Can A Thermal Monocular See Through Sea Water?

Thermal imaging has recently been put to the test for researching marine life by researchers.

While we aren’t aware of thermal camera applications underwater, they have been used to detect marine animals from research vessels.

The technology may be utilized to investigate whale, dolphin, and sea surface activity.

Researchers used a ship-mounted thermal camera with a recognition algorithm to identify the thermal signature of whale blows to automatically evaluate the potential of thermal imaging to detect cetaceans.

During the day, the number of whale sightings detected by thermal imaging was equivalent to that of human marine mammal observers. More significantly, unlike people, the thermal camera can identify marine animals at night.

This system might help decrease whale strikes by informing ships when to turn off their noisy airguns, sonars, and other instruments, reducing the detrimental effects on marine mammals.

The advantages of thermal imaging equipment are incredible. Thermal can assist you whether you are hunting during the day or at night.

During the day, you’ll have better vision thanks to vegetation and concealment, be able to follow a blood trail, and identify targets more easily, particularly smaller animals and varmint.

Cold-blooded animals will be seen, but only as silhouettes. Overall, the sole disadvantage of thermal imaging is that it is more expensive than other professional optics; however, this cost is countered by the various hunting and scouting benefits that thermal imaging delivers.